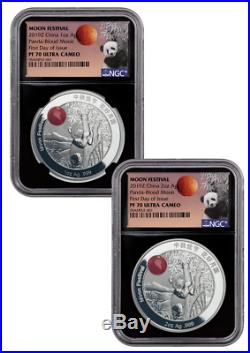 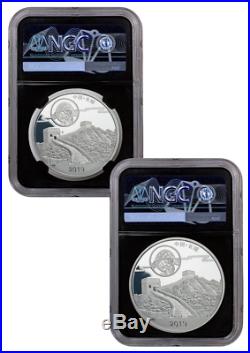 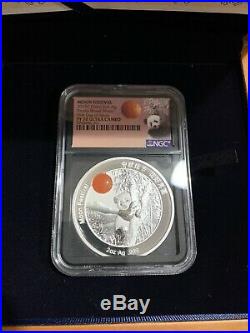 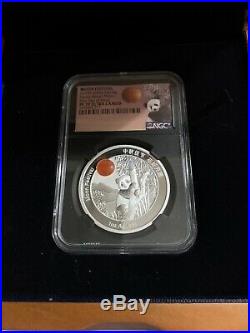 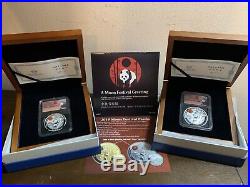 This coin set is one of the most beautiful I’ve seen and probably one of the hardest to get of 2019. This is one of very few if not the only one available at a given time and it’s a great representation of both the Chinese culture, and the artistry found in the coins themselves. Since 2015, China has been issuing special Panda medals to celebrate the Moon Festival. The Moon Festival is one of the country’s biggest holidays and is similar in some ways to America’s Thanksgiving. The releases typically have unique design elements, and this years’ medals are no different. Each one has a red jade inset that is incorporated into its design. The pieces in this set were both struck at the Shenzhen Guobao Mint from. That mint is represented by a “Z” mint mark on the obverse. One weight 1 oz. And the other 2 oz. The smaller piece is part of a mintage of 1,888, while the large medal is one of just 888 of its kind. Both of the medals in this set share the same designs. On the obverse is the largest man made structure ever erected, the Great Wall of China. The holder looks out on it as though standing atop the wall, watching it climb one of several mountains along its path. Above is an armillary sphere, an instrument that was used to make astronomical observations and to tell time. The Great Wall’s Chinese name is inscribed at the top along the rim, while the medal’s date, “2019, ” is provided at the bottom. On the reverse, one of China’s three national animals, a panda, hangs onto a tree. Above is a red jade inset which serves as a Blood Moon in the image. In Chinese culture, the Blood Moon is a harbinger of disease or famine. Encircling this image is a rim frame that has one inscription in English, “MOON FESTIVAL, ” and another in Chinese, which means, Full moon and full blossom are perfect bliss on Moon Festival. A third inscription at the bottom provides the proof’s weight and purity. Impeccable PF70 UC FDI with Deluxe Packaging, Moon Festival Booklet & COA. The two medals in this set come in deluxe packaging that includes a certificate of authenticity and a booklet about the Moon Festival. Both pieces earned Numismatic Guaranty Corporation’s (NGC’s) highest grade, Proof 70, and both Ultra Cameo and First Day of Issue certifications. The grade indicates that the pieces appear flawless under 5x magnification, while Ultra Cameo certification is given to pieces on which heavily frosted devices and deeply mirrored fields contrast particularly sharply. The FDI designation is reserved only for pieces that were submitted for grading within 30 days of their mint releases. The item “2019 China Blood Moon Silver Panda 2 Piece Coin Set NGC PF70 FDOI UCAM Red Jade” is in sale since Wednesday, November 27, 2019. This item is in the category “Coins & Paper Money\Coins\ World\Asia\China\PRC (1949-Now)”. The seller is “partygirl-us” and is located in Carmel, New York. This item can be shipped to United States, Canada, United Kingdom, Denmark, Romania, Slovakia, Bulgaria, Czech republic, Finland, Hungary, Latvia, Lithuania, Malta, Estonia, Australia, Greece, Portugal, Cyprus, Slovenia, Japan, China, Sweden, South Korea, Indonesia, Taiwan, South africa, Thailand, Belgium, France, Hong Kong, Ireland, Netherlands, Poland, Spain, Italy, Germany, Austria, Bahamas, Israel, Mexico, New Zealand, Singapore, Switzerland, Norway, Saudi arabia, Ukraine, United arab emirates, Qatar, Kuwait, Bahrain, Croatia, Malaysia, Brazil, Chile, Colombia, Ecuador, Egypt, Macao, Nicaragua, Peru, Viet nam, Uruguay.