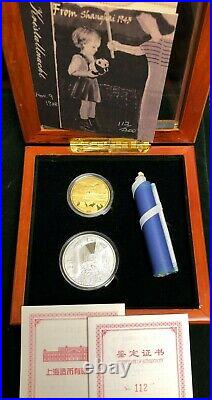 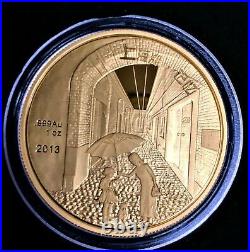 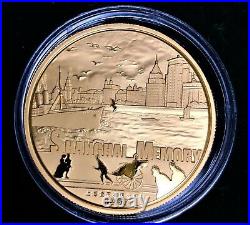 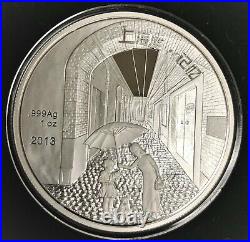 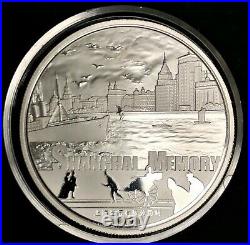 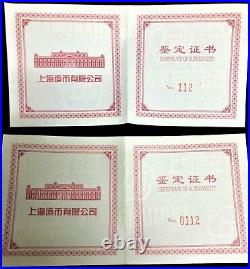 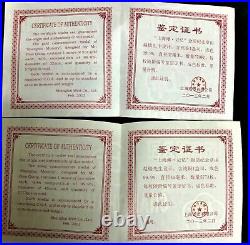 These Numismatic Treasures are composed of 99.9% pure gold and pure silver and have been struck in the sizes of one-ounce. Each one is individually etched with its limited edition number. The mintages are only 570 for the one-ounce gold! And just 5,773 for the one-ounce silver. In the Jewish calendar, 5773 is the year of issue. Each piece also is accompanied by a Shanghai Mint certificate of authenticity written in both Chinese and English. These pieces were designed by engraver “Rocky” Zhao who has created designs for over 40 Chinese commemorative coins and medals including the 2008 Beijing Olympics commemorative 10 Yuan, 2011 gold Panda and next year’s 2014 gold Panda. One side of the new Shanghai medal depicts a street scene with a Chinese lady holding an umbrella over a young girl who is holding a toy panda. The other side has a harbor scene with the SS Conte Biancamano (one the steamer ships that carried refugees from Europe), the Bund business district and the words, Shanghai Memory. Birds in the sky over the harbor fly in a formation that resembles the number, 70, to represent the 70th anniversary of the Shanghai Ghetto. The little girl, “Sara, ” represents a young Jewish refugee, the panda she holds is a symbol of China and the woman with the umbrella is symbolic of China offering kindness in sheltering the refugees. A mezuzah, a small parchment with a Biblical passage housed in a small case and traditionally placed by Jews on doorposts of their homes, can been seen on a doorway to the left of the child. The address on a door to the left of the Chinese lady is 1943, symbolic of the year the District opened to the refugees. A small scroll in English and Chinese that accompanies each medal has an explanation of some of the symbolism written by Xu Xin, a Nanjing University Professor of Jewish Studies. The medals and scroll are housed in a wood box with a glass top representing the story of Kristallnacht, “The Night of Broken Glass, ” in 1938, that escalated the flight of Jewish refugees out of Nazi Germany and Austria as described on an accompanying certificate written by the Center of Jewish Studies Shanghai. From the article featured on the Ynet news. International/Outside USA orders are welcome. For security reasons we do not use the words “Gold”, “Silver”, “Platinum”, “Palladium” or any other words on labeling that would indicate a high value content of the package. All items qualify for a 14-day return privilege. Thank you for being our valued customer! North Bay Rare Coin & Jewelry is one of the nation’s. TOP rated Numismatic Professional companies. We are an Authorized Dealer and Member of. Past President of the Southern California Coin Dealers Association. The item “2013 China Shanghai Ghetto Jewish Memory Rare Panda 1 oz Gold & Silver Proof Set” is in sale since Monday, February 24, 2020. This item is in the category “Coins & Paper Money\Bullion\Gold\Coins”. The seller is “northbayrarecoin” and is located in Saint Helena, California. This item can be shipped to United States.